The State Fair of Texas has become the epicenter of a wide array of new carnival foods each year.

The folks in Dallas might have outdid themselves with several new creations available at the annual gorgefest that starts next month.

The biggest excitement at Sunday’s unveiling was the cotton candy taco that won the “most creative” award at the annual unveiling.

Other new dishes that earned honors included Fernie’s Hoppin’John Cake as the “best taste -savory.” And a new dessert called arroz con leche, described by its organizers as a take on “fried Mexican morning oatmeal,” won for “best taste – sweet.”

The cotton candy taco garnered most of the excitement. It’s understandable, considering it’s made up a graham cracker waffle cone “taco shell” liberally field with a fluff of cane sugar cotton candy, chocolate, a marshmallow glaze and other toppings. 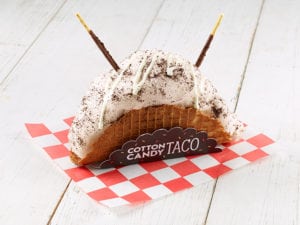 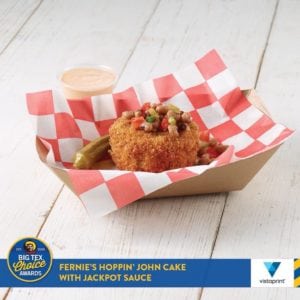 And the arroz con leche is a cinnamon-spiced rice ball that is deep fried with a crispy puffed rice cereal batter. It’s served with a side of vanilla ice cream and a decadent spin of caramel sauce.

Arroz con leche will be available at the State Fair of Texas. (Courtesy: State Fair of Texas).The State Fair has honored new creations like fried beer, fried Jell-O and fried Thanksgiving dinner to new dishes since 2005. These dishes and others are ready to take their place in the pantheon of delicious fair dining.

And don’t forget your Alka-Seltzer.