TxDOT launches annual ‘Click it or Ticket’ campaign at VMHS

A press conference was held Wednesday at Veterans Memorial High School to launch Texas Department of Transportation‘s annual “Click it or Ticket” campaign.

The event featured an installation reenacting the crash that killed 16-year-old Kailee Mills in 2017.

Kailee was not wearing her seat belt when she was ejected from the vehicle. The installation captures the moment prior to impact with the car airborne, upside down. 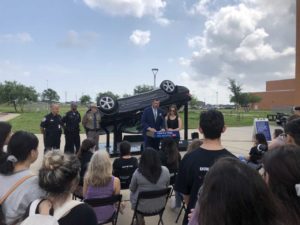 David and Wendy Mills, Kailee’s parents, shared their personal story. They urged students at Veterans Memorial High School to wear seat belts. They reminded the audience that it only takes three seconds to buckle up.

“Those are the most important three seconds of your life every time you get in the car,” David Mills said. “It’s a great investment of your time.”

Video kiosks were available for students to watch a narrated version of Kailee’s story.

Senior Officer Richard Olden of CCPD’s Traffic Division said “there has been 58 fatality crashes in the Coastal Bend that were a direct result of not wearing a seat belt. Inside the Corpus Christi area, there have been 22 fatalities last year directly resulting from not wearing a sea tbelt.”

As a part of the initiative, Texas law enforcement officers will be increasing their efforts from May 20 to June 2 to ticket drivers and passengers who aren’t wearing seat belts.

Texas law requires everyone in a vehicle to be properly buckled up or face fines of up to $200. 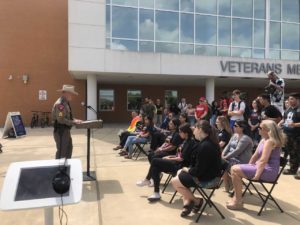 “It’s not about the law, it’s about the safety aspect of it,” Olden said. “And that’s what we’re doing. We’re just trying to save lives and save injuries.”

According to the National Highway Traffic Safety Administration, the Click It or Ticket initiative is estimated to have saved 5,856 lives in Texas.